We probably all have a clear image in our minds of what a willow is when we hear mention of this group of plants. Most people will immediately envisage a large tree on a riverbank, perhaps leaning out over the water and casting interesting shadows and reflections. Some may also picture the wonderful golden colours of a weeping willow beside an ornamental duck pond. While these are classic images of willows, this group of plants also includes lower, bushy plants - collectively known as sallows - which are plentiful in almost any type of wet ground and are often the first woody perennials to colonise damp ground that has been cleared or is drying out due to habitat succession. And there are even smaller species - less than waist high - that grow in coastal dune habitats, while high in the Arctic, willows hug the ground to cope with extreme growing conditions.

Willows are related to poplars and share a few features with them, such as the presence of stipules at the base of the young leaves and petalless flowers that are wind pollinated and clustered together in catkins. Male and female flowers appear on separate plants and those of the sallows seem to be especially popular with bumblebees in the spring.

The species of willow that occur in East Anglia are mostly fairly easy to tell apart, but identification of the sallows is complicated by the freedom with which the various species hybridise. These hybrids can be fertile and further hybridise with other species, potentially creating a bewildering array of forms. We have many uses for sallows and their wood and for this reason, hybrids have been produced commercially and are widely planted in the countryside, further complicating the issue for the would-be botanist. Sometimes, it can be very tempting to quietly move away and go and look at something else!

Wherever you go in East Anglia, it's difficult to not be within sight of a poplar or two. These trees have long been popular (sorry!) as a source of quick-growing timber and most species do best in damp soils, so the open expanses of the Broads and the Fens were obvious places for them to be planted in large number. Indeed, Britain's largest poplar plantation once existed in Lakenheath Fen - some two square miles of planted poplar hybrids which became famous for its population of breeding Golden Orioles for a while.

Poplars have long been useful to mankind and this has resulted in much time and investment in producing ever more useful forms. The horticultural industry has produced an array of hybrids, in particular by crossing North American poplar species with the European Black Poplar and the resulting hybrids have been crossed again with each other to produce startlingly vigorous trees. In more recent times, efforts have been applied to producing varieties that are more resistent to certain diseases of poplars with the result that many trees we might find in the wider countryside cannot safely be identified to variety, but they can still be recognised as being Hybrid Black Poplars.

Most poplars that you come across in East Anglia will be planted hybrids, or selected varieties of introduced species. As well as the varieties that are grown in regimented ranks in plantations on wet soils, other varieties are used as fast-growing screens to hide unsightly industrial buildings from residential areas, or as windbreaks to protect crops or to shield sports grounds. In the case of windbreaks, narrow, columnar varieties are typically selected.

But, as well as all these fast growing hybrids, we have our own native species. The European Aspen can still be found in many woods and along old green lanes and hedgelines across the region, especially on the heavier boulder clays that cover much of south Norfolk and mid Suffolk. Aspen suckers freely and can form open thickets, its leaves being very eye-catching as they tremble in the wind - hence the saying 'quaking like an aspen'. Our other native species is the Black Poplar, a species for which East Anglia holds a significant proportion of the British population. Black Poplars became very rare at one point and efforts were made to boost the population with new plantings. So young trees can now be found quite widely in the region, but the venerable old grandmothers and grandfathers are very much worth seeking out for their individuality and beauty. They stand like wizzened old people, singly in hedgerows and on village greens, or in small groups in the broader river floodplains.

Poplars are at their best in spring when they are at their most vibrant. First the flowers emerge - little catkins that dangle from the branch tips and waggle in the wind like lamb's tails. Poplars are wind-pollinated, so their flowers are highly mobile to allow the pollen to shake out easily, while they tend to appear before the leaves so that there is less hinderance to pollen distribution and reception. All poplar trees bear either male flowers or female flowers, but not both. The species poplars will have both male and female trees out there in the landscape, but hybrids that are named, selected clones will all be of a single sex and this can help with their identification.

Soon after the poplar flowers come the leaves. Many of the poplar hybrids have leaves that are washed with rich shades of copper, pink or yellowish-brown and really stand out in the landscape at this time. The leaves gradually become green as they open, but continue to be eye-catching as many of them have flattened leaf stalks that cause the leaf to bend against the wind in a certain way and thus flutter in the breeze.


Poplar time will soon be on us, so I've just put up the poplars page on the website:

Over the past, well, what seems like an eternity of weeks, I have been gradually cobbling together - amid much muttering and mumbling - the pages for the Flora of East Anglia website that cover the Apiaceae. That might sound like an unfamiliar name to some, as it was only within the past few years that the Carrot Family had its scientific name changed from the Umbelliferae to the Apiaceae. The Umbelliferae was certainly a more useful name, since it aludes to the distinctive flower structures of this family - a many-branched cluster that rather resembles the shape of an umbrella that has been turned inside out by the wind.

The carrot family is quite a large family of plants that is well represented in East Anglia and many who have tried will know that identification of the many species can sometimes be tricky. Thus, it has taken a while to try and come up with pages that will help people get to the correct identification and I may well tinker some more to make improvements over time. But for now, I think the pages seem to work quite well.

East Anglia would certainly be a different place without its carrots, parsnips, parsleys, hogweeds and associated species. The family contains a wealth of species that seem to span every habitat - often dominating the scene during their respective flowering periods. And though these species may often all seem to look the same, it is also a family of great diversity, from herbs and root vegetables to some of our most poisonous plants and most pernicious weeds! So here's a series of photographs that celebrates the exuberance of our wonderful umbellifers...


Hopefully this post gives you an insight into this fascinating family and you will be out next year, exploring East Anglia's wildlife riches and dipping into the Flora of East Anglia to check up on your identification skills!

The word 'catkin' seems to derive from an old Dutch language and translates as kitten - the diminutive of cat. Catkins are common as the flower structure type for many of our trees and early country folk readily identified the furriness of these structures and compared them to furry animals. Indeed, the term 'pussy willow' for the furry catkins of sallows has the same root, while the longer, dangly catkins of trees such as Hazel and birch are also known as lamb's tails - again, a comparison with the familiar.

So why do we see a sudden mass of catkins on such a wide range of trees at this time of year? They are, for example, common amongst the oaks, beeches, hazels, birches, willows and poplars, as well as a few smaller groups of trees. What's the connection and why now? Well, trees are often large and stand head and shoulders above other vegetation. This puts them up into windier locations than those enjoyed by smaller plants - so why not use that to your advantage? Many trees are wind-pollinated rather than insect pollinated; to facilitate this, they produce huge volumes of pollen, since this is a rather random method of getting pollen from male flowers to female flowers; producing huge amounts will increase the chance that pollen will find its rightful destination. Another way to aid this distribution method is to have freely articulating anthers that waggle in the wind and thus shake out the pollen. So we see many species of trees having loosely connected rows of anthers, arranged in pendulous spikes that waggle in the wind. As an aid to encouraging cross-fertilisation with another tree, trees that produce catkins have the male and female flowers carried separately, with the females typically being much smaller and not pendulous. Most of these trees carry male and female flowers separately but on the same tree; but some species (notably the willows and poplars) have male and female flowers on separate trees.

But why are so many of them around right now? Well, if pollen is being shaken out into the wind to be carried afar, it helps to have as few obstacles in the way as possible. So deciduous trees produce their catkins in the spring, before leaves clothe the branches and get in the way.

Here's a few examples of the catkins that will be dangling away in our countryside this spring:

Daphnes - A Heady Scent of Spring

The Daphnes are hugely popular as garden ornamentals and this is largely due to the remarkably strong scent of their flowers, which comes right at the time when we all need a break from the weather. We have two native daphnes in the UK - the deciduous Mezereon (Daphne mezereum) and the evergreen Spurge-laurel (Daphne laureola) - and they both flower from February to March. Both these species can be found in East Anglia, but only Spurge-laurel appears to be native here, with Mezereon favouring limestone soils elsewhere in the country.

Now is the time to get out and look for Daphnes, so I have just added them to the Flora of East Anglia website pages! 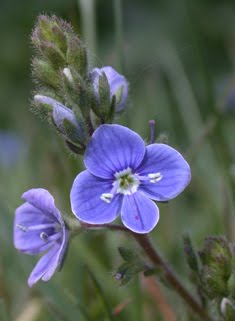